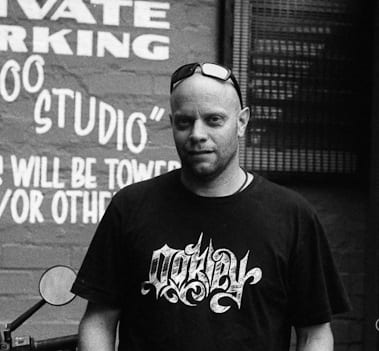 My Tattoo Experience with Kian.

My name is Brendan and I live in Western Australia. For many years I had a passion to get a large Japanese dragon tattoo on my left chest and upper arm.

I visited numerous artists here in Perth and looked through their portfolios but just could not find one that portrayed the dragon in a style that I liked and true to tradition.

Whilst talking to a friend who lives in the Eastern States, he mentioned he had heard of a Canadian guy call Kian in Sydney doing amazing traditional styled tattoos. I did some internet research and found Kian’s website. The images in the portfolio were true to the style I was looking for and the site seemed pretty straight down the line and to the point.

About a week later I picked up and read the first issue of Inked Australia magazine and saw Kian’s article. The way he wrote, and his subject matter screamed “No Bullshit” and portrayed that he was an artist in the truest sense of the word. I decided that I needed to contact him, explain my issue of living on the other side of the country and see if he would be interested in taking on the piece I wanted.

I emailed Kian and got a response within 2 days and for the next few days we swapped a number of emails. All I asked him for was a dragon half sleeve and as long as there was a dragon he could do as he pleased with the rest of the piece.

Kian told me he was keen to do the piece and the distance wouldn’t be a problem. He said he would be flexible in the scheduling to cut travel costs down as much as possible. He also said there would be at least a 1 year wait and maybe a little longer. Like I said to Kian at the time,  “Hey I have waited nearly 40 years for this piece, another 12 months ain’t going to matter!” I also continued to read his articles in Inked and continued to like his approach to life and his belief in tattooing.

During the wait time, I got regular emails from Kian to advise how the wait times were progressing and also updates on what other major things he was up to like conventions and stuff. After almost 18 months I got a call asking if I could come in for a consult. Due to my location I was given the option of a phone / email consult, but I figured I would rather meet the dude in person to see if I was comfortable with him being the person I would let tattoo a big piece on me and spend a lot of hours around whilst he was doing it.

I flew to Sydney a few weeks later just for the consult and went into Inner vision to for the consult. On meeting Kian for the first time I was immediately at ease with him and after talking with him for just a few minutes, felt like I had known him for years. I explained that my concept had changed slightly and for personal reasons I now thought a Koi Dragon was better suited but he could still do whatever he liked with the rest of the piece. Within minutes he had done a rough outline of the Koi Dragon shape fitted to my arm and we also talked about including a chest panel to allow him more space to work with (that would come back and haunt me later). We also spoke about scheduling 6 hour sessions instead of the normal 3 hours so I wouldn’t have to travel over to Sydney as many times, and locked in some appointment times subject to availability of flights.

I was pretty nervous about my outline session as I had never sat for 6 hours straight before and didn’t know how I would handle sitting still for that long especially with some pain added in. All the nervousness disappeared when Kian showed me the drawing of the Koi for the first time. He stenciled it on and then freehanded the background and some detail onto my arm, and even at that stage the piece came alive.

During the sessions, hanging out with Kian was really chilled and relaxed and nothing was too hard for him and his crew. There were good tunes, crazy stories and a whole bunch of other artists drifting in and out, chatting and checking out each others work.

Every time I went for another session, there was a visiting artist from somewhere in the world to talk to and learn stuff from and I got to check out their work and different styles.

Through all the sessions, Kian was happy to talk and share his experiences and knowledge. We also talked through each stage of the piece to make sure we were both happy with it and talked through some possible future pieces. Also big credit to him for putting up with me bitching and moaning and squirming for 6 hours at a time as well, especially during the more sensitive parts of the chest panel.

I also learned a whole bunch of new stuff especially about his other passion, photography, and managed to get my photo taken with a Russian camera from the 1940’s, not really something you get to do every day.

At the end of it I have an incredible piece of art on me for life that is truly a one off piece designed for me alone by an incredibly talented artist and a plan to get more.

I have to say, it was an amazing experience that was worth every day I waited and every cent it cost me to get there. 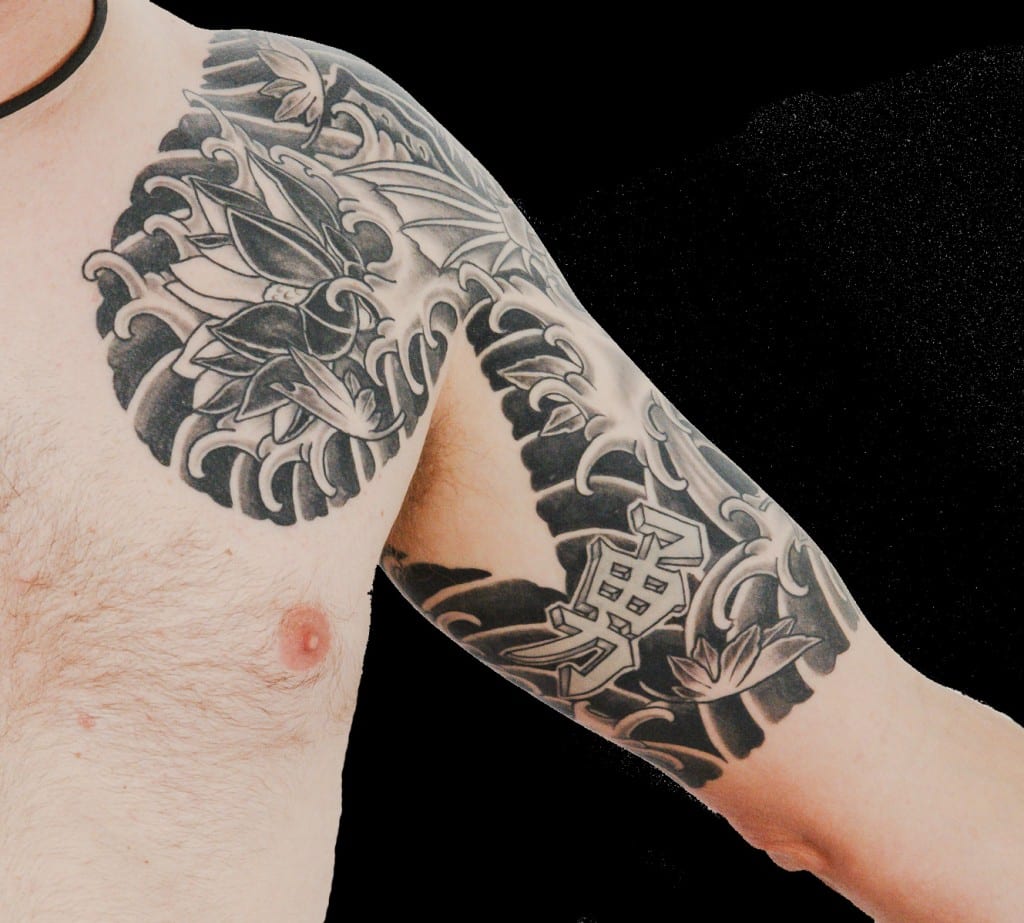 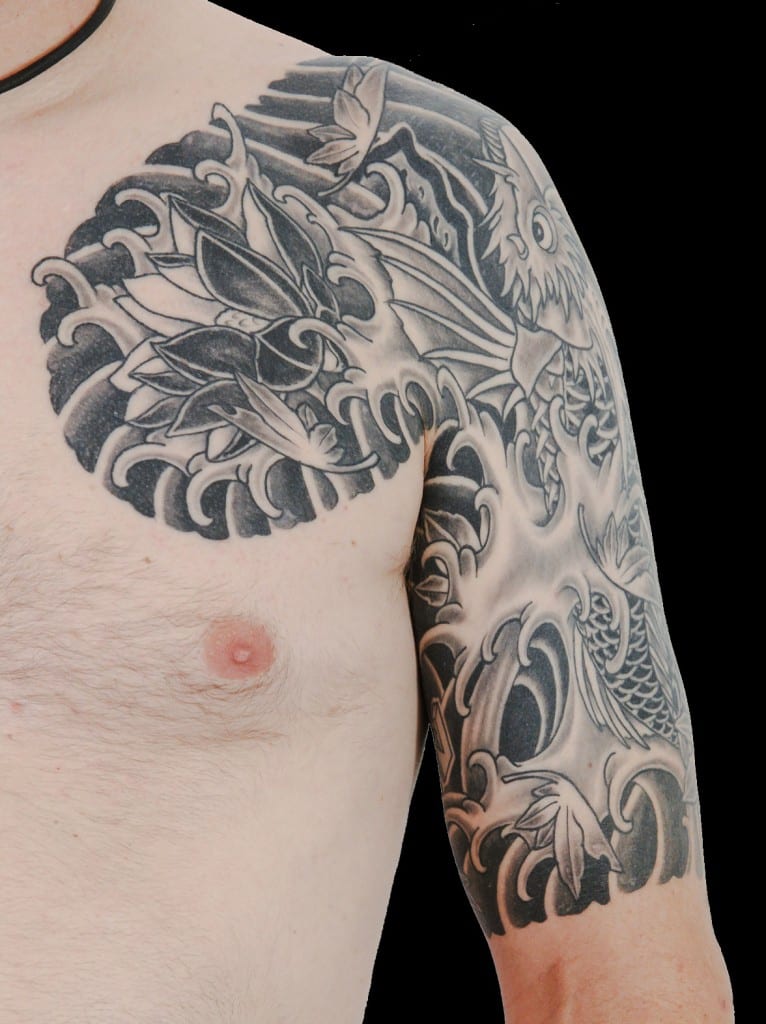 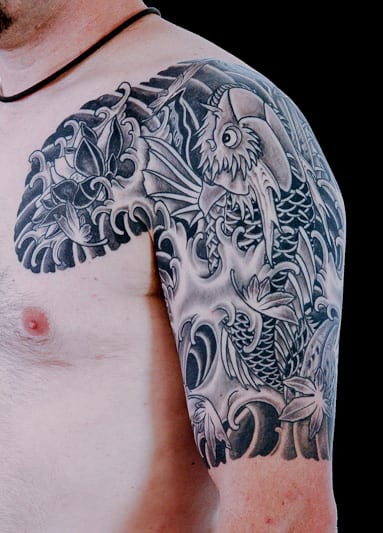