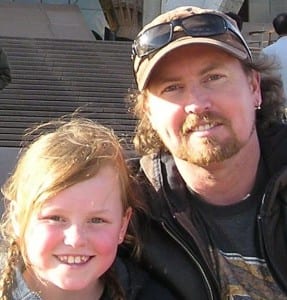 I don’t remember making the decision to get a tattoo.

Somewhere between taking more notice of the tattoos my friends had and lying on Kian’s table it happened.

It was an idea that progressed slowly, I had no tattoos, had no idea of what I wanted or where to get it on my body. I bought tattoo magazines and learned about the different styles of tattooing; Japanese, traditional, tribal, Celtic etc. The Japanese style stood out the most for me.

I liked the colourful larger pieces, suits, backpieces and sleeves. I realised I wasn’t after a small flash tattoo, I wanted a large custom tattoo that has a lot of symbolism for me.

More digging around on the internet, looking at tattoo pictures and I started thinking about a Japanese dragon backpiece. I liked the symbolism behind the Japanese dragon – strength, protection and wisdom.

Finding an artist was next, checking out websites for Sydney tattoo studios and walking into a few of these studios to get a feel for the place.

Kian’s name came up a few times when I mentioned I was after a large Japanese dragon backpiece. A visit to Innervision (he was working there then), a look at his portfolio, and a check of his website and I thought I had found the guy to tattoo me.

“Choose an artist whose work you like. Don’t make the artist change their style to the tattoo you want.” This was some advice I had read in a magazine and I liked Kian’s style.

I booked in for a consultation. Waiting and thinking. I wanted to have design input into the tattoo, I would have to give Kian some idea of what I wanted, but I didn’t want to cramp his artistic style by having an inflexible design of what I wanted. It was more about concepts I wanted in the tattoo than an exact picture.

I have two kids, my daughter’s middle name is Rose, she’s such a nature girl, loves plants, flowers and animals of all kinds. My son is my little monkey; he’s so active, never still.

So my design input to Kian was to have a Japanese dragon backpiece, with full coverage, ie, no skin left untouched and my son and daughter represented in the tattoo somewhere as a rose and a monkey.

The dragon is providing strength, wisdom and protection for the rose and the monkey.

Consultation day came, Kian was friendly, listened to what I was after and took some measurements of the size of my back. He asked questions about layout and colour and took notes. More waiting. I didn’t mind the wait, I knew it was part of the price for getting a custom tattoo from a popular artist.

Then the nerves started, I had no tattoos, what would it feel like? Am I biting off more than I could chew? Could I handle the pain? Suck it up princess, if other people could get tattooed then so could I.

First session, I still hadn’t seen the design of the dragon and wasn’t sure what to do if I was unhappy with the design. I needn’t have worried, I was very impressed with the stencil he had drawn. Getting the stencil on me took the assistance of one of the other artists in the studio.

I remember standing in the studio with my shirt off, pants down and the stencil had been peeled off my back. This is it. Kian took a few moments getting his things together. He made a couple of touch-ups on the design with some kind of marker. The first time the marker touched my back I flinched. Nerves. Even though I couldn’t see him I’m sure I could feel Kian rolling his eyes. The needle hadn’t even started yet.

But then it did. It was kind of a relief to find out what it felt like. Sure it hurt but at least now it was a known, no longer an unknown. The first session went for four hours, just the outline of the dragon.

I wasn’t sure if I was more nervous for the second session, now I knew what I would have to go through for the four hour appointment. This session and the next few were shading the background. More sessions, more shading, detailing, getting the monkey and rose tattooed, then colours.

As the sessions progressed I got some tattoo rituals going. Most of these were mental. Life becomes a moment in time when you’re lying on the table, one moment followed by another, then another. Just get through this moment, then the next and the next til the session is over. Endure it.

I definitely had some kind of out of body experience while getting tattooed. As the session started I would try to find this meditative state. Sometimes I would imagine I was flying, or floating on clouds. Other times I was floating in water or swimming at the bottom of the ocean. Sometimes I was the ocean, or a mountain or the clouds. I would think of my kids and providing strength, protection and wisdom for them.

All while the needle continued.

I imagined that the feeling of the needle was the dragon’s claws, clawing out of me to the surface. I am not the dragon, it is separate from me, but a part of me.

Kian was mindful of what I would go through for each of these sessions, he was sympathetic to me, the client. I didn’t chat much, trying to make my mind wander and he let me be, just getting on with the job.

All up I had 14 sessions totalling approximately 55 hours of tattooing. It has given me greater strength of character and ability to endure whatever life throws at me. I have a one of a kind artwork on my body for life that has a special meaning for me. 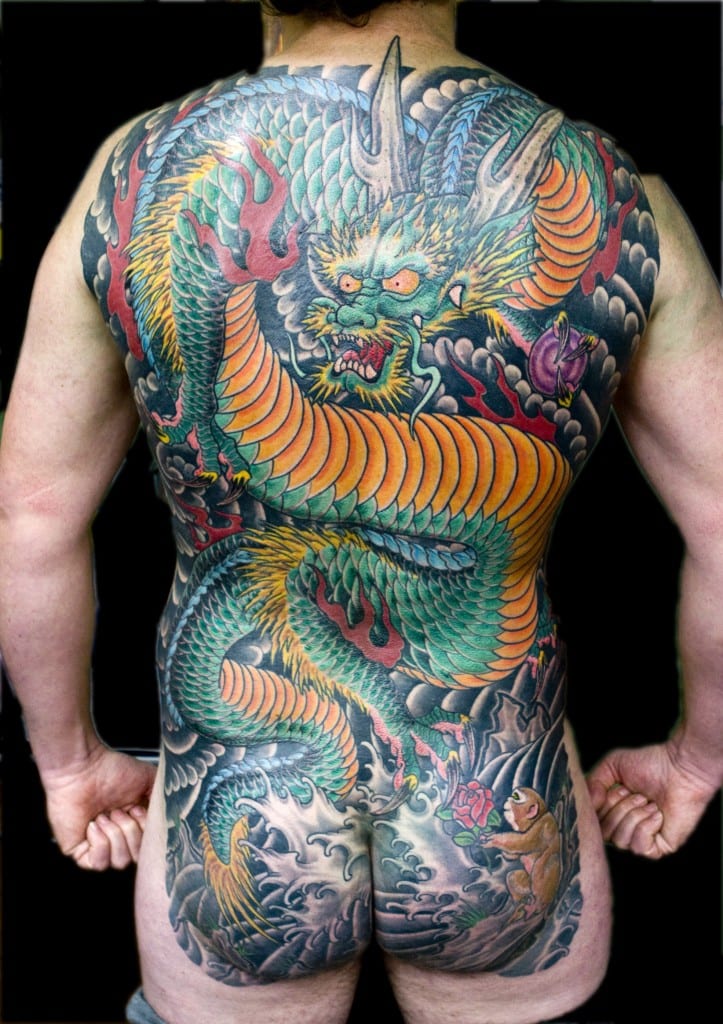 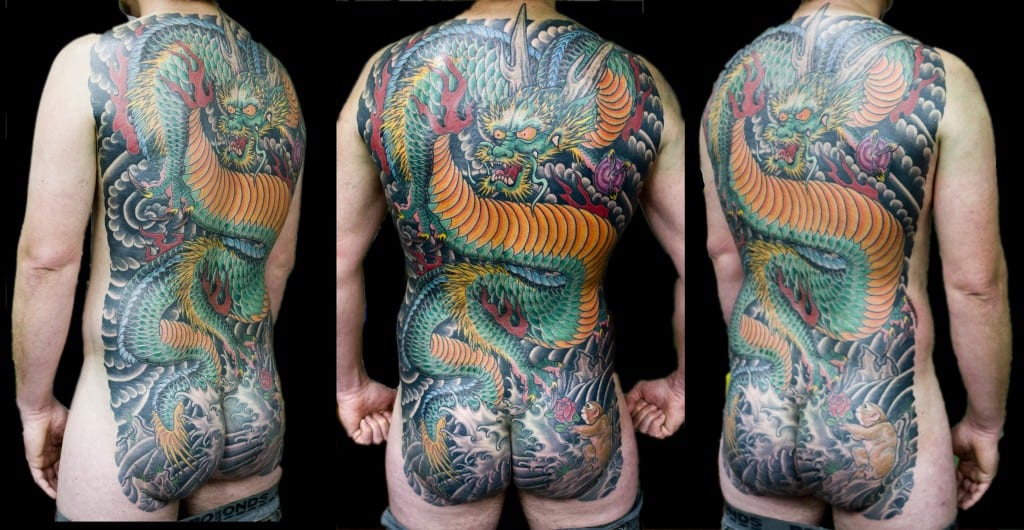