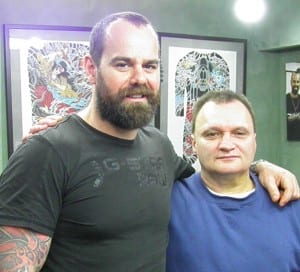 Finding a horishi in Australia

Trying to find a horishi in Australia was at times a frustratingly long road, but I am happy that it took as long as it did, as I was able to spend that time (5 years) looking at what makes a good tattoo.So when I found Kian’s site I did not know who he was and had not looked at the Pr stuff on the site.I had gone to the portfolio first, and was impressed. It was after I had been put on the wait list that I started to look at the Pr stuff the magazines he had contributed articles to and the shows and TV stuff he had done but it was the work that stood out. If you look closely you can see the progression of his style in the art form of a traditional Japanese horishi. You can see as it’s changed and evolved over the years to a level you don’t see in this country often. I had seen a lot of my friends get tattoos over the years but most of the work did not impress a few were very good but not my style of tattoo.

Now I have see all types of work over the years everything from good art to very low level work but mostly a procession of low level work when it came to Japanese themes  but once in a while something came along that makes you take a second look. Some of the western type portrait work that’s being done in Oz now is great and has come a long way But unfortunately you still see some young guys getting bad work and passing it off as some form of street art, but once you have seen some of the good work that’s out there you will scrutinize the stuff you see on the streets in a new light. Now I have even seen great jail tattoos but not often I remember guys running jail cell shops inside and the young guys who did not know better lining up to mark their stay but 99%of the guys that got that type of tattoo cannot stand them now.

One of the best Japanese tattoos I had seen up close at that time was from a Japanese guy I had met after he  had been grabbed at the airport and was doing time he had a back job that just knocked your socks off the color work was on a level I had not seen before and all sitting on a great black Background I had seen western type work with Japanese themes going all  the way back to my martial arts days  (a dragon was the club logo) but this guys work had impressed .So it stayed in the back of my mind so that if I got to Japan I would look in to having some work done. I would look from time to time over the years who was new and had started work in my home city but still did not find what I was looking for. When internet sites started to show some of the Japanese horishi and others that are working now it rekindled  the fire but still no one in oz on that level  for 5 years I trolled the net looking for the right artist as I said  I had seen great artists doing western work but not traditional Japanese  then  over time  the Japanese style became more  popular but still with a western slant .But a few did look at the flow and feel  of the traditional Japanese work and understood the tattoo had to have good structure and a good strong black background, when I ran into  Kian’s work  I liked the style the bold colors and strong blacks and a good understanding of the backgrounds I had also spoken to other artists but only one other had interesting  work. But unfortunately he did not instill confidence (no wait list ) and from the strange contact I had with them and the more I looked at the work, I knew It was not for me. So I contacted kian and 12 months later I got a call telling me to come up. I had given kian a rundown of what I wanted in a few emails and with his help we went from my ½ sleeve to ¾ because on a ½ sleeve the dragon would not have looked right for my vision of the work (to squashed) so now I had to finalize the ¾ sleeve. Now at this point I was 90% convinced all was well, but we had not met till now so I wanted to see how that went. From the emails I started to understand I had to put my trust in to Kian. So now Kian was in the driver’s seat  and  I am  the type of guy that likes to be in control, so to his credit Kian seemed to understand even when I was sending him email after email  of my  vision on how it should look, that was taken from his photos. He could have gotten pissed off with me cutting up his photos with Photoshop and showing him the parts that I wanted in my tattoo, but he worked with me and got me to understand that each work belonged to the guy that has it, mine can look similar but not a copy of it. That’s real custom work! So you will not see a dragon that’s a copy of mine and yes I have seen tattooists that must have one stencil for all customers that want the same as that photo on their site.

So in that first consult we finalized the road ahead now I could see that he was someone that did not have a lot of time, but has a good work ethic and he gave me the feeling he would be there till the end.  Now at times he did not explain as much as I would have liked but that’s where the trust comes in. So now I was convinced and happy to go forward and booked my first set of sessions and off we go. The first one involved putting the outline on that he had worked up from the drawing.  My only criticism was that I would have liked to see the drawing before  It was  to go on as making changes at that point would have been hard and meant  more  visits  but I was lucky the drawing was good so no changes.  I was coming a long way so ½ day sessions were out and had to go for 6h sessions. I had at the start before speaking to kian and in my ignorance thought I could come and spend a week or two and finish in one big sitting. But now understand that is not the best way forward, it takes time to heal the tattoo from the day’s session. He started on the outline and he must have seen by the weird look on my face I was feeling pain and gave me some great pointers on how not to focus on the pain and keep breathing out. Which did nothing to ease my pain but the empathy was good  he had been there; it was not too bad on the Tattoo pain scale say 4or5 out of 10. In the next visit number (2) some of the background work was done and the pain went higher say a 6. Kian was trying to help me relax and I was starting to get more comfortable with what was going on and getting in to a rhythm and as I tried to keep my mind off the work. Kian put some music on to lighten the mood which helped me refocus on Kian’s musical taste’s J I had thought that by the third visit that some pain control would be appropriate it was a hard day, say an 8 for most of the 6h during the course of the day I started wondering what the fuck I was doing sitting in the chair. I had the thought that if I had not given a commitment to stay all day and did not want to look like a guy that cannot handle the truth (it’s painful!) I probably would have gone home. But a 10 min break and some more pain control and I was good to go. so much so that towards the end of the day I was so,oo relaxed that kian had thought I had fallen asleep ( I think I did L )  I told him if I  fall asleep again give me a kick or two to wake me up and point me to the front door (too much pain control J) So by the forth visit I was starting to go with the flow but there was times I was still wondering what the fuck I was doing there .I think it’s not so much the pain but the long hours  so if I was living In Sydney  it would have been 3h or 4h sessions  as the way forward .  The 5th visit was a hard day also, the color work seemed a bit more intense so the break for lunch was much welcomed as a chance to get to know Kian a bit more as I found it hard to concentrate and have a relaxed conversation when he was sticking needles in to meJ but my tattoo was evolving into a work of art and I was happy with the progress of the work and luckily I had no problems with healing the tattoo.  I was not putting anything on till the third day when I would use some Vaseline Moisturizer for a few days, that’s what worked for me. The 6th visit was the last and by now I was a lot more relaxed kian spent extra time making it look just right going over some of the lines again which I appreciated and reinforced that it was about the quality. By the end of the last day I was looking in the mirror at a 3/4 sleeve with chest plate and after 8 months of work, commitment, and pain it was done!! And well worth the time invested I think doing your home work is the key, know what you want have it mapped out well, use drawings even the portfolio, to show Kian your vision on how it should look and then watch him bring the piece to life and make it part of your persona. I have been to the new workshop and was very happy and impressed to see it’s setup with tranquility and privacy as its main theme like the horishi of old. Kian told me at the first meeting that once you get the bug you will be back, he was right, good art will always have you wanting more, so for me it’s on to the other side. And to my friend and horishi Kian, thank you,  Jim 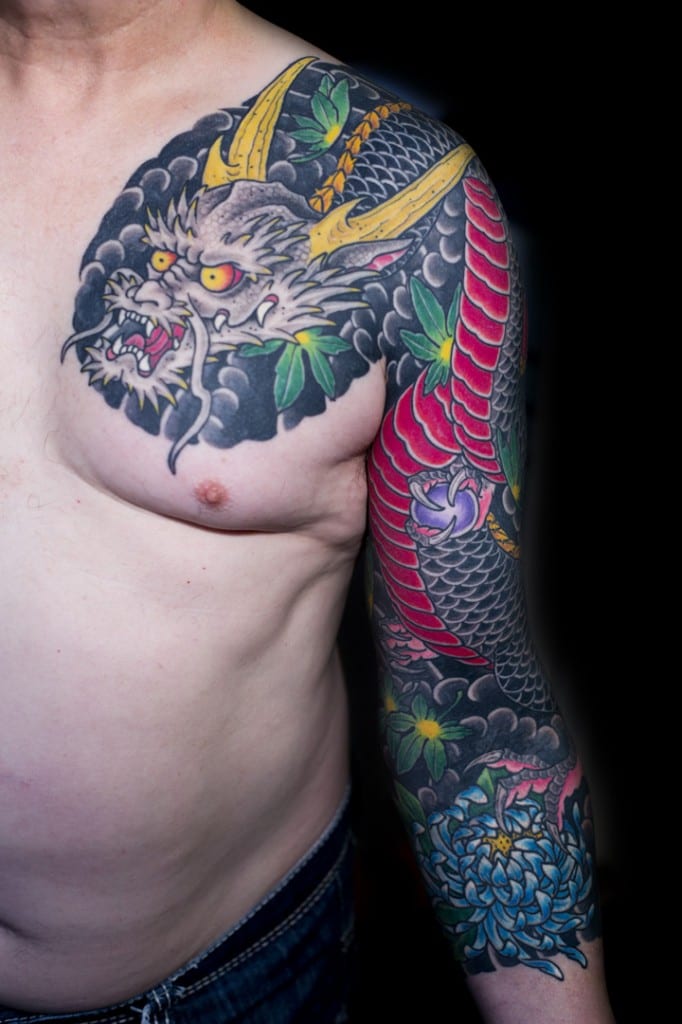