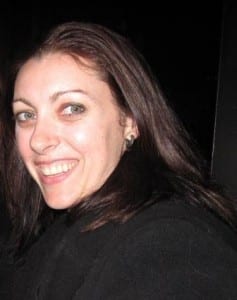 I’m a 37 year old woman, I work as a consultant for a fast100 IT Program delivery consultancy. I don’t fit the typical large tattoo demographic, not societies current label anyway.

I’ve had a fondness for tattoos for many years, even the old sailor tattoos that cover the arms of my grandfather, and the geisha girl that adorns my cousins leg, from hip to ankle, I studied Japanese at school and university, visited Japan several times and had a general interest in all things Japanese, especially dragons. When I first decided that it was time to get the back piece I had wanted for years, I read and reviewed tattoo artists from all over the world, noted what to look for in an artist and studio. Aside from quality, original stunning artwork, reputation was one of my key considerations, I wanted an artist with personal integrity in his work, but I also wanted someone I could speak freely to about what I wanted, someone who had a love of what he did, and was a visionary in his art. As I was considering have a large piece of artwork on my body, forever, quality was my primary concern. Budget and schedule, did not enter the equation.

The first artist I considered was via word of mouth, this was before I had really done too much research on Australian artists, the referrer talked him up, I briefly looked at his portfolio on line, it looked ok, it didn’t jump at me, but I was going with her to get a smaller tattoo so thought I’d see how it went, and hit him up about his thoughts on my dragon. After a conversation, experience with the simple tattoo he did and him telling me to just send him the art I wanted, I decided against it. I wanted someone who would deliver me something original, someone that specialised and understood Japanese tattoo art. That was when I started looking online to find out who was considered the top Japanese tattooists in Australia, I narrowed it down to 2 I was interested in, both had around a 2 years waitlist. I viewed the portfolios, I read their biographies, the reputation of the studios and other artists they worked with. I googled and read blog posts and reviews about them. In the end, I couldn’t stop looking at Kian’s portfolio, over and over, I liked his standards, his integrity with his work, I liked that he was particular about the projects he took on and how he told you how to pronounce his name. I emailed him, he got back to me in a week or so, told me he was interested, and to call the shop and add my name to his waitlist. I waited just over 2 years.. in some way, I liked having to wait, I became more settled that this was what I wanted, I also felt like I was in an exclusive club.

Finally I got a call. Consult booked.

First impression of Kian: I was a little intimidated, he was all business, he was hairier than his photos. Bushman beard hairy – with twinkly eyes. I remember being a little shell shocked that day. I forgot to bring the print outs of the dragons I had seen on his site for reference, and for some reason, that morning, during my pre-appointment anxiety, I thought it would be a neat idea to get half my back done. I knew I’d become familiar with that look he gave me when that idea fell out of my mouth. But it didn’t seem to bother him much. I got a straight, no nonsense, don’t even question me again ‘no’ and he carried on asking me questions about the design I wanted, it was over quickly, he took an outline of my back, scribbled some notes on my design, took me downstairs to pay my deposit and book my first 6 appointments. Done.

Second impression – outline day: I came prepared, I had been ‘putting the lotion on the skin’ as instructed since my consult, I had panadeine, (I pre loaded – pretty sure that was a waste of time), I had sports drink and mentos for sugar hits if needed. I got ordered to strip, well he was nice about it, I think I remember him telling me to think of him as my doctor, I got more nervous about that statement later when he snapped on his rubber gloves. He showed me the design, and after my nod of approval – he applied it and got to down to business with some strict instructions to not move or twitch. After the first 10 minutes I wondered what the heck I had got myself into, I was committed. I was determined to lie still and not be a girl. He let me up for a few breaks, I think mostly to check I hadn’t fainted, I made good use of my sugar supplies. I remember at one point asking him ‘has anyone ever just got up in the middle of a tattoo and walked out’ he replied without a pause ‘no, and you are not about to be the first’ I never intended on it really, but thinking about it and running it through my head, kept me sane. The worst pain, was the butt, are you kidding me!?! I was flinching like crazy, I couldn’t help it, nerve reactions, I got warned several times to not move. But I didn’t, and 5.5 hours later, it was done. Not a tear, I kept down my lunch, and other than a few minor butt twitches, I didn’t move. Tattooing hurts, don’t fool yourself that it doesn’t. there are less sensitive spots, but after the session, you feel good, like running a marathon I suppose, not that I’ve ever run one, but I imagine its similar.

Throughout the next 10 or 12 sessions I had every 2 weeks, the needle hurt every session, some sessions more, some sessions less, but Kian made me feel as comfortable as possible, taking my mind off the pain with his chatter and teasing and end of world theories, I loved seeing the progress every week. I diligently followed Kian’s aftercare instructions, I was questioned every time if I had been looking after ‘his’ tattoo, I didn’t dare mess up. Kian takes a lot of pride in his work, and I came to believe I was actually his canvas, and I had commissioned him for the work, the least I could do, to care for his art permanently inked on my back, is listen to the expert and follow his instructions. The end result was entirely worth the effort, the time and the cost. I love my original Kian Forreal dragon back tattoo. 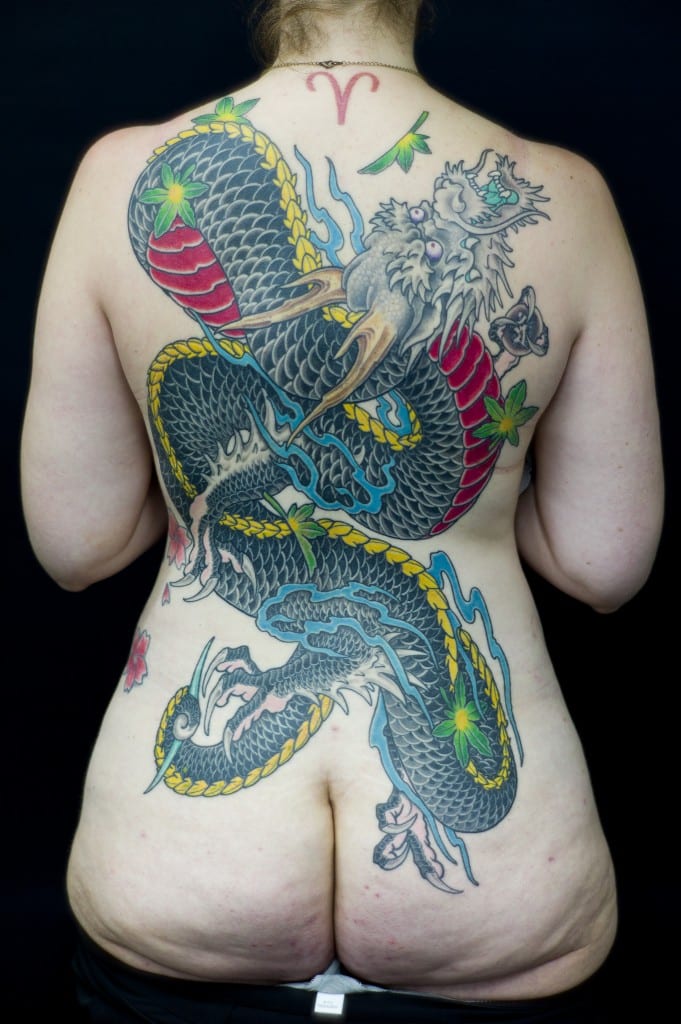