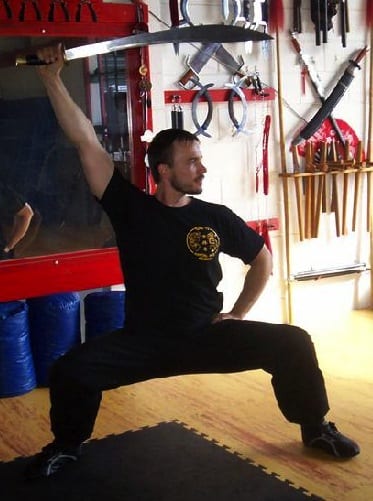 My name is Teja, I’m 33 years old and am the director of Point Specifics acupuncture and Chinese medicine clinic, and the Kung Fu Academy in the Hills district of Sydney.

Whilst travelling around Turkey as an impetuous 20 year old, I decided to get a tattoo. So there I was, on the south coast beach of Olympos getting tattooed – hand poke style – by an itinerant Swedish artist. The tattoo itself was a small tribal dragon on my right ribs, and I envisaged myself getting a matching tiger for my left side, those images being the symbols of my Kung Fu school.

Years and life passed, and once I’d established my clinic I started to think again of getting the tiger. I must have forgotten how uncomfortable the first one had been in application…

I first met Kian around 6 years ago after he was referred to me by one of my clients. He was working out of a shop on Crown street in the city and I made an appointment for a consultation. Greeting me in a very warm and friendly manner, he then took one look at my dragon, and my proposed matching tiger, and said that there was no way he would put anything like that on my body. This shocked me! I thought my little dragon was pretty cool, and I ‘wanted’ what I ‘wanted’! Referring me to a number of other studios, he said any clown could do it. I think he could see that I was a little disappointed, so he showed me his portfolio. He also showed me some tribal work he had on himself, and how poorly that style ages over time. After listening to Kian and seeing his portfolio, I began to realise what real tattoo art looked like, and that what I was currently wearing was not art, but rather a stain.

It was clear to me from the outset that Kian wasn’t just trying to get my business and money, giving me what I ‘wanted’, but rather that he was only interested in real art, and in creating a tattoo that would last a lifetime – not just the current trend or fashion cycle. Instead of balancing one crappy tattoo with another, he explained that we could instead put a beautiful tiger on me, something that would I would be proud of. This was a confronting situation, I was put on the spot. I came in wanting one thing but was being offered something totally different. Yet I agreed.

A couple of months later and my drawing was complete, and my first official appointment had arrived. I was very nervous about seeing the design… what if I didn’t like it? What if I hated it? What if I wanted to change something? I sat in the reception area and Kian brought the drawing to me, and left me there alone to look at it. I couldn’t believe it. Beautiful. Not just beautiful, but strong, and yet solemn. Huge powerful shoulders and gentle eyes. In a tattoo? I had never thought it possible. When Kian asked if I liked it or not, I asked if we could actually make it bigger than we had first planned! Kian spent a long time getting the placement right, which ended up extending from just below my armpit down to my thigh. For me, with my little dragon, this was HUGE!

Then it was time to lie down and get started, and I started to panic just a little, on the inside so he wouldn’t notice. But he did. He talked me through the process and gave me strategies to deal with the pain. Setting up his inks and the massage table, Kian was meticulously clean and sterile. He’d obviously spent years doing what he did, and this showed even in his initial preparations.

The ribs, if I may say, are a VERY tender area to have tattooed. Still now, 6 years on, I can still remember getting this tattoo, and how I just wanted to get up and run out of the studio as soon as the whir of Kian’s tattoo machine hit skin. Fuck it hurt. No, not like a mosquito bite! Like a burning hot razor slashing up and down my bones and into my very organs. And that’s putting it lightly. I remember squirming and grimacing and groaning (not in the good way…), and then Kian stopped, looked me in the eyes and said:

Which I translated as “Dude, man-the-fuck up!” Yet something in what he said, simple as it was, planted a seed inside me. Pain is a feeling. It is information to the brain, warning me of danger. But there is no danger, I’m in a safe and clean place under the hands of a master craftsman, so what’s the big deal? Following on this line I began the process of developing courage in the face of pain, which I often still forget, but Kian is always there to gently remind me.

Finally the first session was over, outline and black stripes done! “Great!” I thought, pain over! Wrong. Getting home afterwards, with every bump in the car, every breath that expanded my ribs… ouch. Home finally! Pain over! Wrong again. Then came the peeling back of the protective wrapping, trying to come to terms with Kian’s haphazard usage of tape, the torturous shower, hot face washer and soap. Kian had explained how important this first step of the healing process was, and that all the excess ink, blood and slime had to be cleaned off. This first shower is something I always look forward to after a session with Kian.

Healing the tattoo properly between each session was major, and I had a strict regime to follow. Each fortnight Kian would inspect ‘his’ tattoo and either critique or commend me. Once the tiger was finished Kian put forward the idea of adding cherry blossoms, which again was something I never would have thought of, but as soon as he mentioned it, it seemed the right thing to do. I’m not sure if he is also a hypnotist… for even though the tattoo was finished, and I was ecstatic, I also knew that my journey with tattoos, and with Kian, had only just begun…

The following year I wanted Kian to take a look at my old tribal tattoo and see what he could do. Of course he dismissed the idea of touching it up a little, and instead he drew an enormous Oriental dragon to cover it! First though, he recommended that I first have a couple of sessions at Fade Laser Tattoo to lighten it. Oh boy, if you think having your ribs tattooed is bad, try first having them  lasered… years off my life, I swear.

I was just glad that my ribs were finally finished! Done. Project complete… Until…

That time of year came around again, and I shot Kian an email about doing a leg piece to tie in with the dragon we’d just finished. So I went in for my consult and walked out pale faced, looking down the barrel of a back-piece. A lone warrior, standing at the waters edge, sword in hand, wind in his hair, and bearded of course. The process of getting the image right took a lot of research and drawing, and re-drawing on Kian’s part, until he felt comfortable showing me the result. By now I wasn’t even worried, as I knew it would be amazing, which it was. Kian had designed the perfect centrepiece for our project, something that would tie both of my sides together.

Finishing this tattoo took over seven months, with sessions every two weeks. Two of these sessions stand out to me more prominently. The first was the first: 8 hours of outlining – I was vomiting by the end of it and it took me several days to recover… I know, I know, ‘man-the-fuck up!’ you’re saying. The second session was somewhere near the end, the rear end as it were. It had come time to get down to business and sort the crack out. As it was explained to me, you can’t have a back piece with a crack in it, so of course, one has to tattoo it… all. The application of this particular inkage to that particular area had me screaming. Several large tattooed men came over to watch the process, so I guess it wasn’t all bad (see Chafe productions for more information…). Getting my back done was a huge commitment from both Kian and I, as well as my family. Somehow Kian is at his best every session, totally focussed and in control. Over that time in particular, I feel I got to know Kian well, and I consider him a friend and mentor.

Over the next two years we’ve worked on my half sleeves and chest pieces – falcons and a python. The thighs are to follow with Koi designs, thereby completing my body suit… such an amazing journey from just wanting a little tribal tiger! 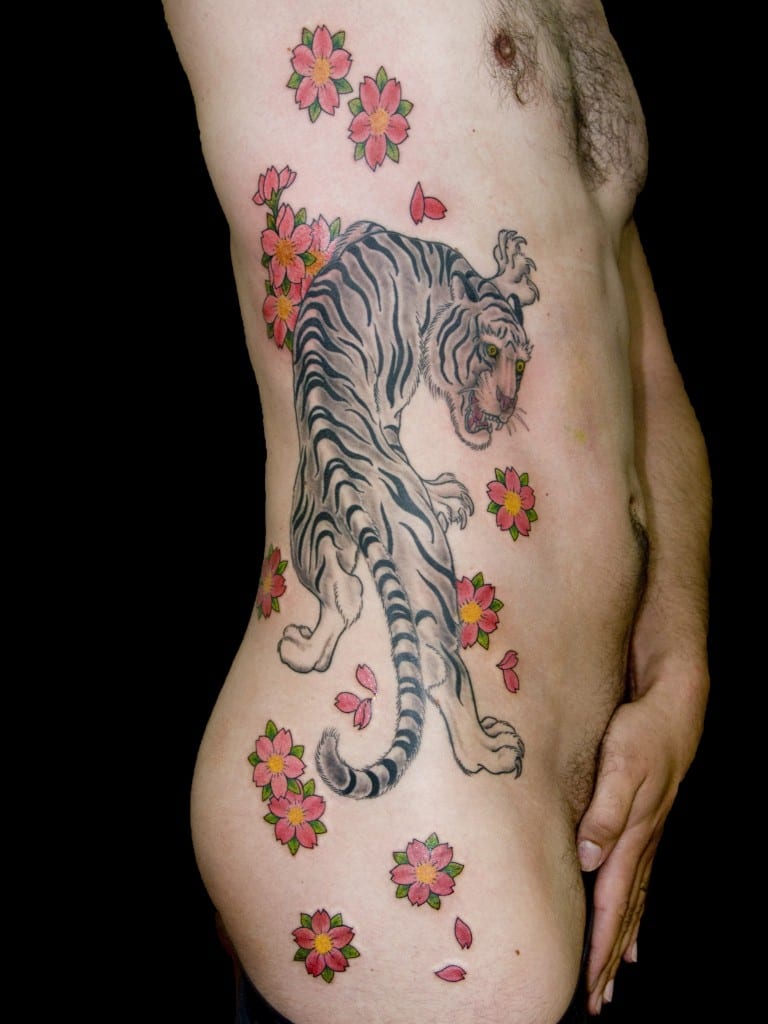 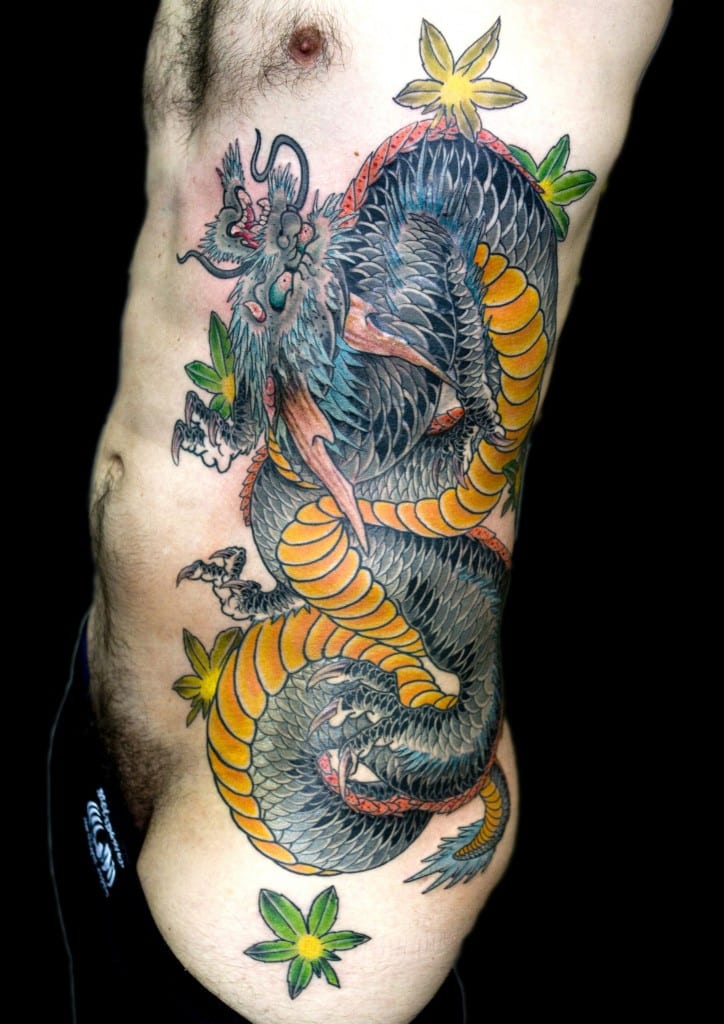 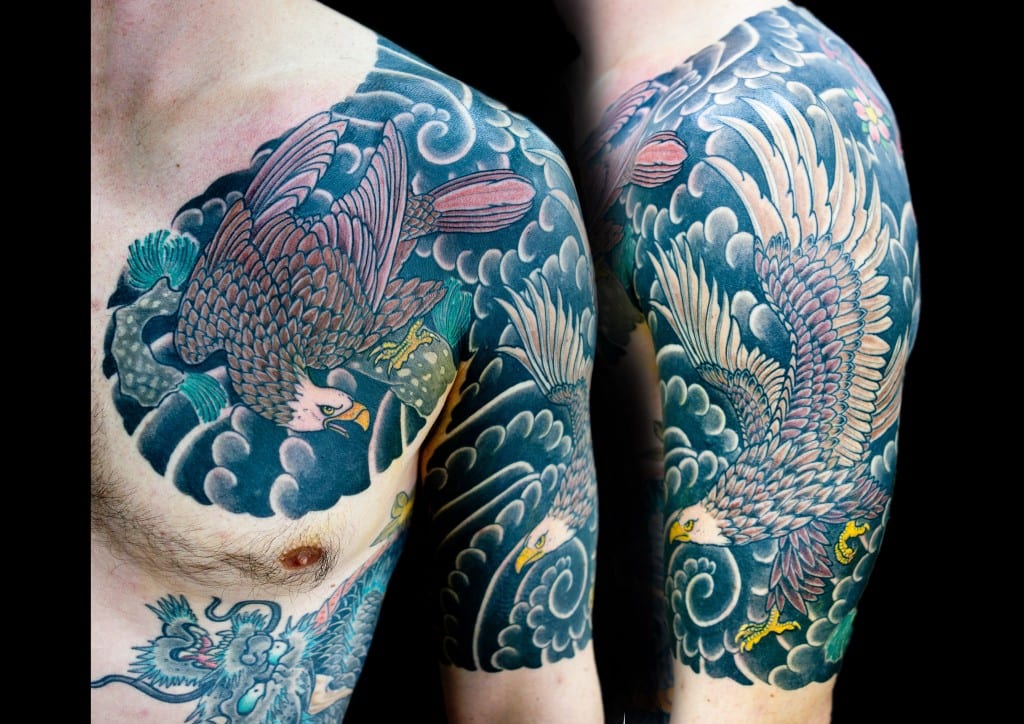 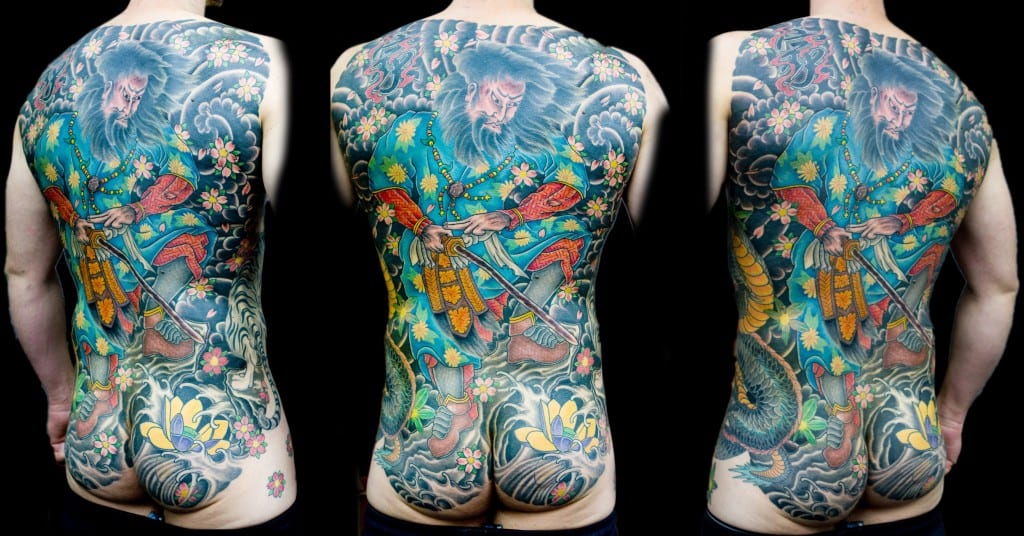 Warrior Backpiece to tie it all together 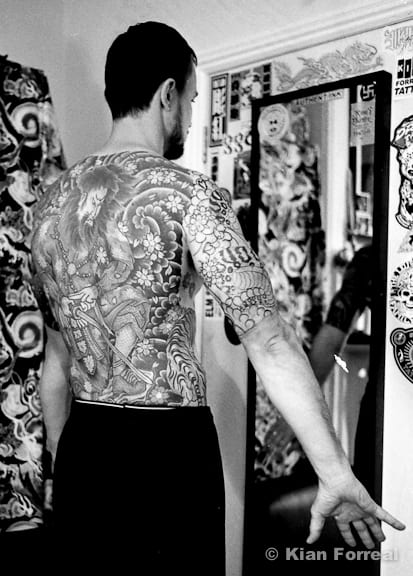 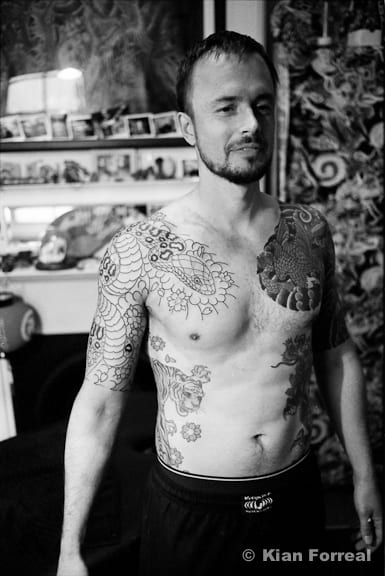 right side in progress…. ribs next!